Penelope Scambly Schott, author of a novel and several books of poetry, was awarded four New Jersey arts fellowships before moving to Oregon, where her verse biography, A is for Anne: Mistress Hutchinson Disturbs the Commonwealth, received an Oregon Book Award for Poetry. Several of Penelope’s books and individual poems have won other prizes. Her individual poems have appeared in APR, Georgia Review, Nimrod, and elsewhere.

Penelope has enjoyed fellowships at the Fine Arts Work Center in Provincetown, Massachusetts, the Vermont Studio Center in Johnson, Vermont, and the Wurlitzer Foundation in Taos, New Mexico. 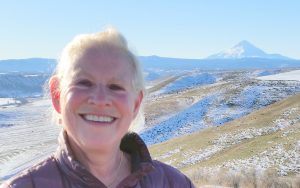 Professionally, she has sold cosmetics at Macy’s in Herald Square, made whole wheat doughnuts at Scrumpy’s Cider Mill, taken care of the elderly as a certified home health aide, written scripts for software on career guidance, posed as an artist’s model, and—as punishment for her Ph.D. in late medieval English literature—spent years and years teaching college literature and creative writing courses.

Penelope and her husband live in Portland, Oregon, where they host a series of poetry readings called The White Dog Salon—although she and the actual white dog have an alternate life in which they spend part of each week in the small, wheat-growing town of Dufur where she teaches an annual poetry workshop. From her house in Dufur, Penelope can see the east side of Mount Hood, the high school football scoreboard, and the Milky Way.

In 2013 she published two books which are quite different from each other, a sweet tribute called Lovesong for Dufur, which she read at the old Balch Hotel in Dufur and sold to all the locals who want their grown kids to move back; and a relentless but sometimes hilarious historical study of prostitution called Lillie Was a Goddess, Liliie Was a Whore, for which Penelope had trouble booking readings. Her 2014 collection How I Became an Historian is a lyric examination of the connections between past and future, both in her family and in the larger world.